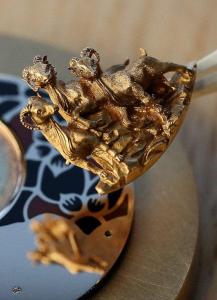 The tradition is now established: every Chinese New Year Jaquet Droz observes the change in the zodiac cycle with a model celebrating a rare technique or new craft skill practiced in its Ateliers d’Art. It is a way for the brand known by its twin stars to pay tribute to its ties with China since the 18th century.

At the beginning of the Year of the Goat, the watchmaking firm will launch two new models in honor of this animal – symbol of imagination, creativity, and a world of pastoral riches. The form of this creature recalls the nourishment it provides, but also presents a real aesthetic challenge when it comes to reproducing it on the dial of the Petite Heure Minute model.

The artisans of the Jaquet Droz Ateliers d’Art, who live and breathe this sense of challenge, decided to represent not just one goat, but three. Springing from the summit of an imaginary mountain, like an allegory of achievement and the hope of success for the year ahead, the three animals astonish with their striking realism. Each element of the body, each minute detail, is thrown into relief in three dimensions by the master artisan’s skillful touch.

The end result is all the more captivating against the backdrop of a stylized dial evoking a motif of plum blossom in pure, simple lines. Together with bamboo, chrysanthemum and orchid, plum blossom is one of the four noble flowers that featured in Chinese iconography over 1,600 years ago. Unfolding their petals in winter, these blooms are an early herald of the promises of spring and youth refound. They stand out against a background of white mother-of-pearl or black onyx, two materials that reappear on the underside of an oscillating weight surmounted by a ram’s head.

To create the stylized plum blossom, “meihua" in Chinese, the Ateliers d’Art used champlevé enameling, a particularly demanding technique that guarantees a result of exceptional delicacy. The metal is hollowed out according to the desired design and the hollows are then filled with enamel, fired and hand-polished. The finished dial is reminiscent of the exquisitely fragile masterpieces of “Jianzhi," the Chinese art of paper cutting that dates from the middle of the first millennium.

Limited to just 28 pieces each, these two models work equally well in the fresh palette of white gold and Jaquet Droz blue and in the warm tones of red gold paired with a delicious wine burgundy. As precious good luck charms anticipating all the triumphs and successes of the new year, they will delight both connoisseurs and collectors in the know.