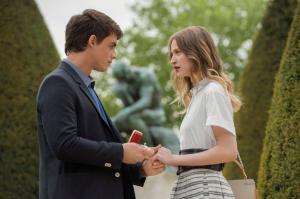 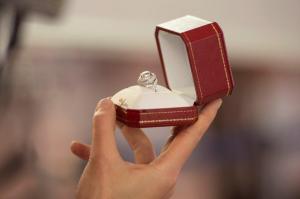 The creative project gave carte blanche to English director Sean Ellis*, noted for his short film Cashback, which won him an Academy Award nomination in 2006, and his film Metro Manila, winner of the World Cinema Audience Award at the Sundance Film Festival in 2013.

In The Proposal the director, working together with French screenwriter Olivier Lecot, has created three Parisian love stories in which the Cartier box pays a surprise visit: at the Musée Rodin, in the lift of a philharmonic concert hall, and at Paris airport to enliven an existing marriage.

Between a game of hide-and-seek and misunderstandings, The Proposal is like an ensemble piece in which original romances intersect during the course of three proposals.

The first shows a youthful and affectionate treasure hunt in the gardens of the Musée Rodin, drawing to a close at the foot of the famous Thinker sculpture. This features the emblematic actress Christa Theret, known for her role in Lisa Azuelos’ film LOL.

The second story unfolds with a rushed series of missed opportunities in front of the lift in a large Parisian concert hall, where the doors consistently close on the lovers. These roles are portrayed by the young Franco-Irish actor Oisin Stack (David Bobée’s Hamlet) and actress Ana Girardot (Lights Out by Fabrice Gobert).

And finally, the third is a completely unexpected declaration that unfolds in a dramatic turn of events at the airport, following a series of new developments between a husband and wife. A passport is stolen and returned and finally a surprise “remarriage” proposal is elicited. This last opus is performed by Nicolas Bridet (You Will Be My Son by Gilles Legrand) and Anne Charrier (Guy Mazarguil’s L’Art de séduire).

These three declarations together convey the romantic Parisian atmosphere, iconic box and the diamonds of Cartier with a stroke of elegance.