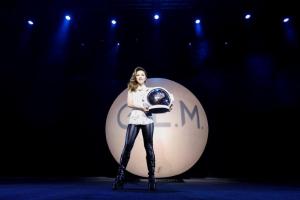 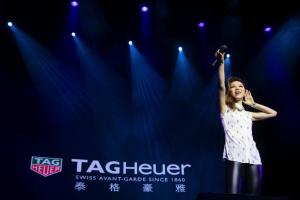 A phenomenon all over Asia. She’s young, beautiful and talented, with a powerful voice and a much-emulated look. She’s hugely successful and, at just 24, loved and admired by youngsters throughout China and Asia, who know her songs by heart. An established singer, composer, dancer, musician and actor, G.E.M. – which stands for “Get Everybody Moving" – performs in front of tens of thousands of fans. Each of her videos is a genuine event, and she shares her life with her army of fans on Chinese social media.

#DontCrackUnderPressure could be her motto. Late last year, she was chosen by China Central Television (CCTV) to perform live in front of the entire country at the Chinese New Year concert. And now G.E.M. is making the most of her fame by heading into space. She is actually receiving her training in Russian space station – the space flight will be taking off from Mojave, United states.

Jean-Claude Biver, President of the Watch division of the LVMH Group and CEO of TAG Heuer, stated: “I am particularly proud that G.E.M. has chosen to become the TAG Heuer ambassador. She is only 24 years old, and set to become an icon for an entire generation. With her outgoing personality and bold communication style, the tireless singer will give TAG Heuer a tremendous boost in terms of connecting with young people both in China and throughout Asia."

G.E.M. is a true character and an extraordinary trailblazer – very much in the TAG Heuer mould. She joins the family of TAG Heuer ambassadors – Cara Delevingne, David Guetta, Cristiano Ronaldo, Maria Sharapova and many others. Let’s Rock!